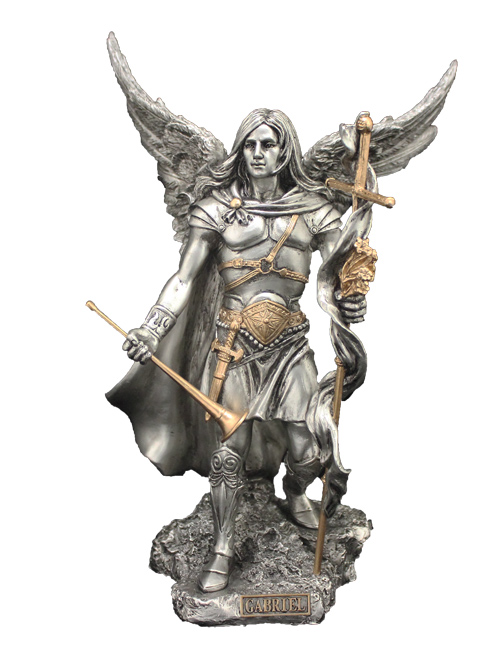 If I were an artist, I would paint a picture of the nativity.

In it, there would be a multitude (a heavenly “host” – which is military terminology) of angels surrounding the stable where baby Jesus is sleeping, so many that their ranks would extend from the sleepy little town of Bethlehem all the way to the hillsides.

And they wouldn’t be facing baby Jesus. They’d be facing outward. And they would be dressed not in flowing robes but for battle, wielding flaming swords.

“Behold, a great red dragon, with seven heads and ten horns, and on his heads seven diadems. His tail swept down a third of the stars of heaven and cast them to the earth. And the dragon stood before the woman who was about to give birth, so that when she bore her child he might devour it” (Revelation 12:3-4).

This is war. Lucifer – the fallen archangel – who led 1/3 of the angels in a rebellion against God, “has come down to you in great wrath, because he knows that his time is short!” (Revelation 12:12).

The more I read the Bible – and the account of Jesus’ birth – the more I visualize it this way. Jesus is God who has taken on human flesh. Now, He is born as a completely helpless human infant. He can’t feed himself, He can’t even roll over, and even His immune system is vulnerable. He needs protection, and under threat of destruction by Satan, He needs the protection of more than just Mary and Joseph.

There aren’t many times – even in the Bible – where God gives us these glimpses of the spiritual battles that go on all around us between the forces of God and the forces of Satan.

For many people, these images would be terrifying. The more I think about it, the more I love this thought. One, because God’s angels are way more awesome than most artwork depicts. Sorry, Willow Tree; we own plenty of your faceless angels giving hugs and holding hearts and puppies, but I’m not sure there’s really a dedicated “Angel of the Kitchen” (that’s a real product, but if I’m wrong, I bet she/he makes great tea).

God fights for us. He sends His angels to protect us: from danger and from the evil one.

In the past, this was a realization that was more at the forefront of our minds, and it still is in different cultures and places around the globe. In many ways, we’ve become insulated from mortality, we’ve been inoculated against disease, and we know far more “plenty” than famine.

I mean, this is how we depict our nativities now. Just saying.

But the war still rages for our lives. And just as God directed the multitude of His heavenly host to protect the Christ child at His birth, 30 years later to attend to Him in the wilderness after His temptation by Satan, and 3 days after His crucifixion to announce His resurrection victory over sin, death and the devil…

…He watches over you. Trust me, if Jesus needed it, so do you.